A couple of weeks ago I made a rare trip to the cinema and even donned ‘RealD’ 3D glasses for the first time in my life. This unusual behaviour was prompted by the release of DREDD, the new film written by Alex Garland, which I really hoped would do justice to the 2000AD character I grew up with.

I was not disappointed. In fact, a day hasn’t gone by when I didn’t wish I could see it again. It’s still in cinemas here in the UK, (having debuted at no.1 in the box office) but it only opened this weekend in the United States and I’m envious of Americans who have more opportunities than me to enjoy this visual feast!

The central performances were excellent. Olivia Thirlby is one of the film’s great strengths and I was inspired to draw her as rookie judge Anderson.

(I was so overwhelmed by cinematographer Anthony Dod Mantle‘s inoxicating colours that I decided to stay safely in black & white for this!)

The main setting of the film, Peach Trees city block, was a wonderfully evocative location. Here I felt I could see most clearly the influence of comic artist Jock, whose interpretation of Judge Dredd I’ve always admired, and who worked on the film. (I’m lucky enough to own a page from Jock’s Dredd debut strip and even then he completely understood how to show Dredd and his world).

It was Peach Trees which inspired my next drawing. I’ve ended up including Dredd, but I started off trying to capture a sense of the space contained by the mega-building. Dredd just marched into it. [Please, click on the image to see it at a decent size.]

I decided to use this ‘digital woodcut’ style after revisiting an old portrait of Dredd drawn a long time ago but which I think is the closest I’ve come to capturing his character. 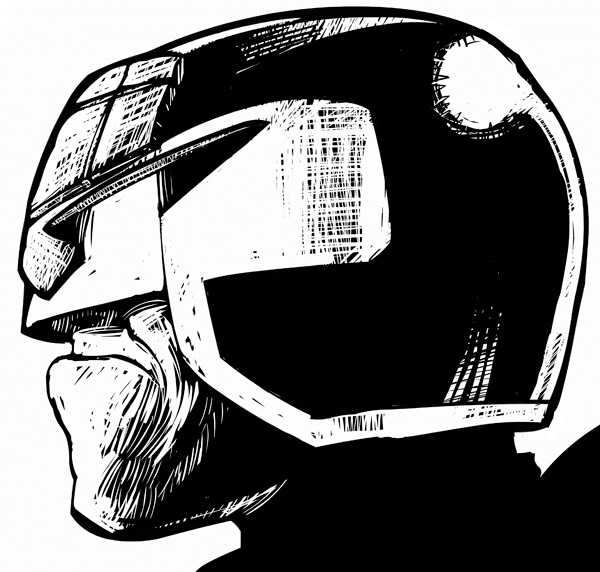 Anyway, if you’ve read this far and haven’t booked tickets to see Dredd, do it now – it’s worth it!

On this day 177 years ago, HMS Beagle introduced Charles Darwin to Charles Island. It was here that Darwin was told about the tortoises on different islands of the Galápagos having differently-shaped shells (one of many clues which led Darwin to the theory of evolution by natural selection.)

25 years later, On The Origin Of Species was completed and in the hands of readers. As one of the most famous and discussed books of  the last one and a half centuries, it has been joined by countless satellite islands – each with its own differently-shaped interpretation of Darwin’s theory.

Now, JF Derry has come up with a book which charts these differing views. The Dissent Of Man is built on more than 50 interviews with thinkers as diverse as Richard Dawkins, Noam Chomsky and Susan Blackmore: it will show how far Darwin’s ideas have been transformed by others. For more information on this fascinating book, visit Unbounders website, where you can pledge your support. I hope you will, I was sufficiently impressed with the project to contribute a new Darwin portrait, which will appear in the book. 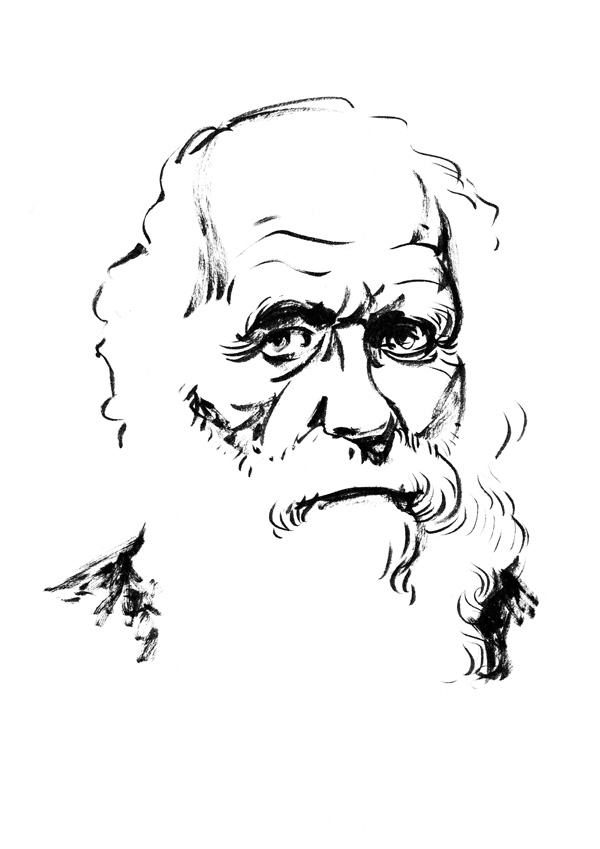 That portrait has been made into a print, as has my Punch-style cartoon of Thomas Huxley’s famous battle with Samuel Wilberforce. Both are available as pledge incentives. 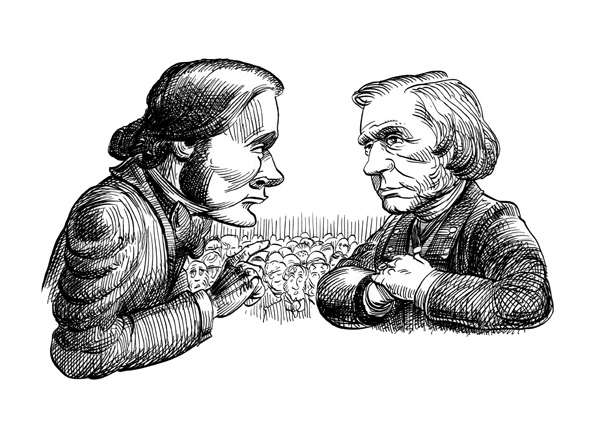 There are plenty of other reasons to support this book, but ultimately it’s a brilliant idea for a book, put together by an extremely capable and knowledgeable writer. I for one want the chance to read it!

Post script: Charles Island (now called Floreana Island) was once nearly destroyed by fire, thanks to a careless sailor from the Essex, a whaleship which was later sunk by repeated headbutts from a gigantic sperm whale, in a famous incident which inspired Melville to write Moby-Dick. Moby-Dick is currently being podcast in free daily instalments.

Here are some digital illustrations directly influenced by printmaking, particularly woodcut & linocut. They were mostly drawn in a vector application, apart from Blackbeard (drawn on paper, scanned, then tweaked in Illustrator to look more like a handcut block) and the last three, which were all done in Photoshop. 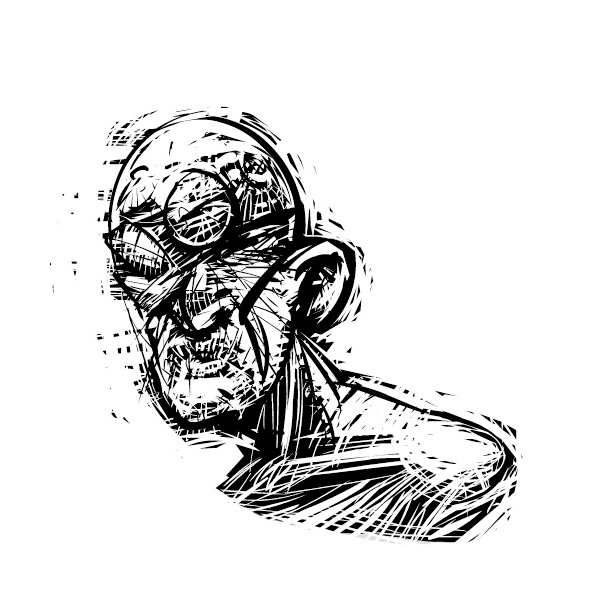 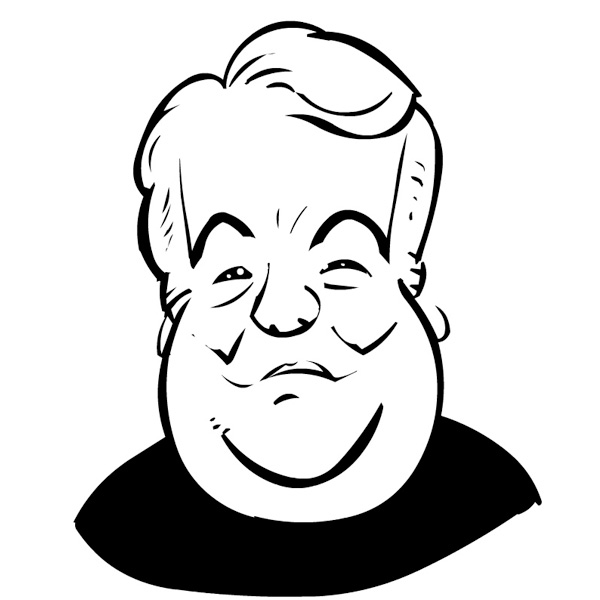 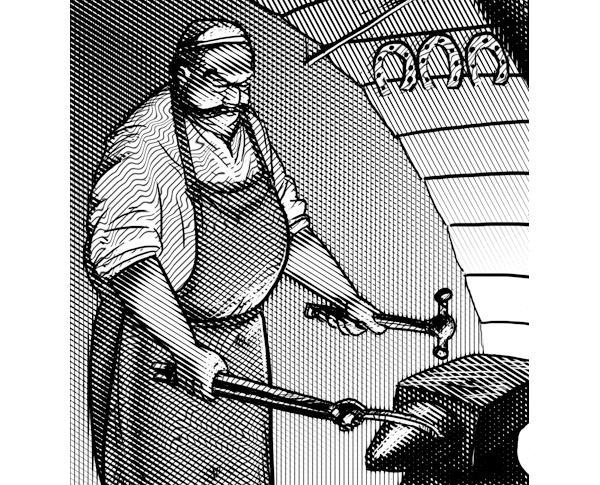