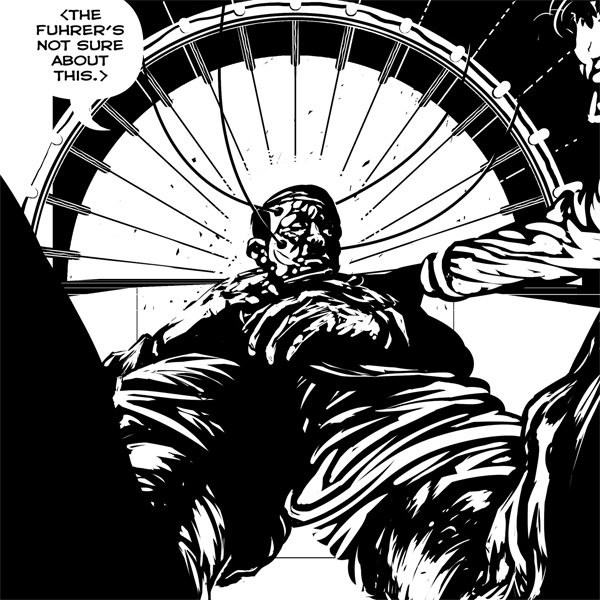 Rob Williams created Cla$$war, LowLife, The TenSeconders, The Royals and most recently Ordinary. He has thrown the likes of Wolverine, Judge Dredd and RoboCop into perils of his own devising. He was one of the brains behind 2000AD‘s cross-narrative spetacular Trifecta.  In short, he writes good comics. So I was delighted to have the chance to draw one of his scripts, especially when I read it and saw how funny it was.

I don’t think it would be giving too much away to say that Time Twisters: Burping Hitler (in 2000AD prog 1887, out now) is about the classic SF dilemma of travelling back in time to kill the Fuhrer. But it’s a very different take from Herbert Lom’s conversation with Christopher Walken in The Dead Zone, or the great Strontium Dog adventure The Schicklgruber Grab.

In figuring out how to approach the artwork for this Time Twister, my first concern was to do justice to the humour in the script. I didn’t want to undermine any of the gags or distract the reader, so I decided against filling the panels with my own additional sight gags. (There is however, one ‘easter egg’ visual reference to a classic time travel story. See update 2,  below.) I also needed to find the right visual tone. My last work for 2000AD was drawing Si Spurrier’s The Stitch, an intense, romantic tragedy which demanded rich tones and textures. 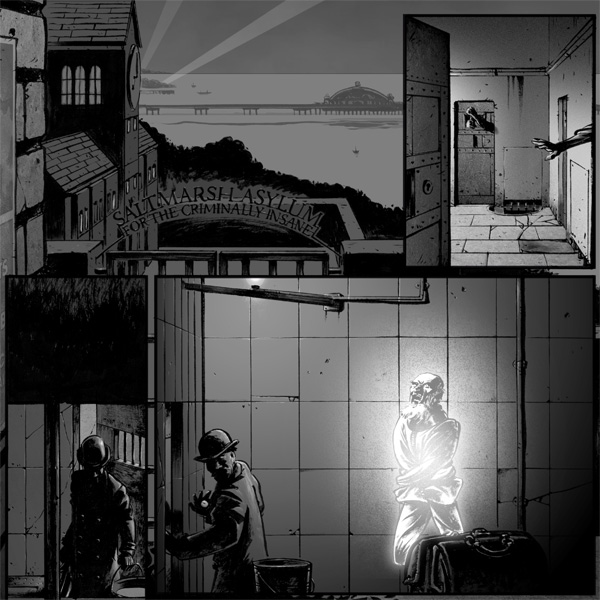 For Burping Hitler I looked at a lot of Commando Comics and BATTLE for inspiration, their gritty black & white artwork seemed a more appropriate feel for Rob’s WWII story. This short period of research also renewed my appreciation for DC Thomson’s two great Kennedy’s, Cam and Ian 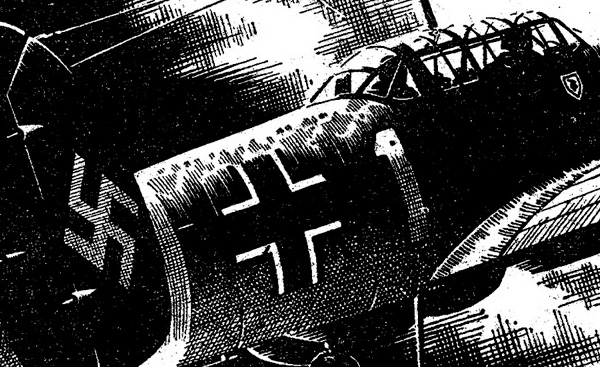 Having looked at BATTLE and Strontium Dog, I was feeling very appreciative of Carlos Ezquerra‘s work. His visualisations of time travel in Strontium Dog were an influence, as was Jack kirby’s distinctive depiction of Hitler (although Kirby ended up having more or an effect on my time machine design).

Partly because I was using stark black and white and partly because the story was concerned with Hitler’s emotions and intellect, I looked at German Expressionism, an art movement which was over before the 1944 events of Burping Hitler, but was at its height during the middle decade of the artist and dictator’s lifetime. (The examples below are prints by Hermann Scherer and Kathe Kollwitz) 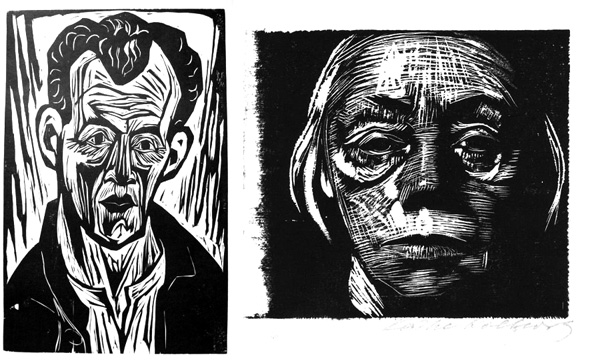 At this point I had probably spent too much time on research for a four page strip! So I started to draw, using Manga Studio almost exclusively and reserving Photoshop for a few special effects. This was the first time since 2001 that I had drawn a strip for 2000AD entirely digitally, with no scanned elements. Back then I had been using Flash.  I can report that Manga Studio is much much nicer to draw with. (Future Shocks: The Enhancer, 2000AD, 2001)

To achieve a woodcut effect (which I hoped would be in keeping with Commando’s stark black and white, but also evoke German Expressionist-era printmaking), I drew the figures in silhouette first, then modelled features on top with a white brush. I’ve always enjoyed the solidity that come from drawing into solid black, and found this way of working to be quite natural after a while.

Rob had written a majestic opening panel, looking at Hitler’s alpine retreat  The Kehlsteinhaus , which is perched on a peak high in the Bavarian mountains. I needed to grab the reader with this opener so tried to do something dynamic with the sky while still working in a black-and-white-no-grey style. For this I was thinking of Gustave Doré‘s Rime of the Ancient Mariner illustrations and also the brilliant Nicolas Delort whose  work I admire enormously.
To achieve the swirling, engraving-style lines seen in the sky I created clouds and mist using Photoshop’s clouds filter and converted to bitmap mode using a line shaped halfscreen. I then used the warp transformation tool to twist the lines around as much as I wanted.

As with most of my comics work I lettered Burping Hitler myself so I could be sure of how much space I had left to depict the action. It’s then up to the client if they want to use my lettering or hire a letterer. In this case, the editor wanted  the freedom to make tweaks to the dialogue, so mine wasn’t used. Here are a couple of lettering ‘outtakes’ then. A Nazified version of the Time Twisters masthead, and a set of vintage toy building blocks spelling out the title. The initial letters come from the German word for each pictured animal.

You can see those illustrations, larger and unobscured by the letters, on my Instagram page.

Thanks for reading this far. As always, any feedback on the published strip is welcome in the comments below.

I should have included these examples of a similar ‘digital woodcut’ style, as they’re relevant. They were both drawn in Flash and are ‘fan art’, not official 20000AD work.

The spot-the-homage prize went to Mike Donachie on Twitter, who was first to point out that Joe Saturday and Ed Thursday – from Alan Moore & Dave Gibbons’ brilliant Time Twister Chronocops – make an appearance on page 3 of the story.

One thought on “History’s Greatest Monster”